If you have always imagined snakes as some sort of sinister creature that spends its time lurking about waiting for some hapless bystander to slither out and bite the life out of, then you will may wonder why this bulletin even warrants writing.
Conversely, if you know snakes intimately and realize that their motivations are akin to any other animal (hunger, thirst, the desire for shelter, a mate, etc.), it may be less surprising to see videos on social media of people sitting on their couch with their cobra or picking up a rattlesnake barehanded to move it across the road. 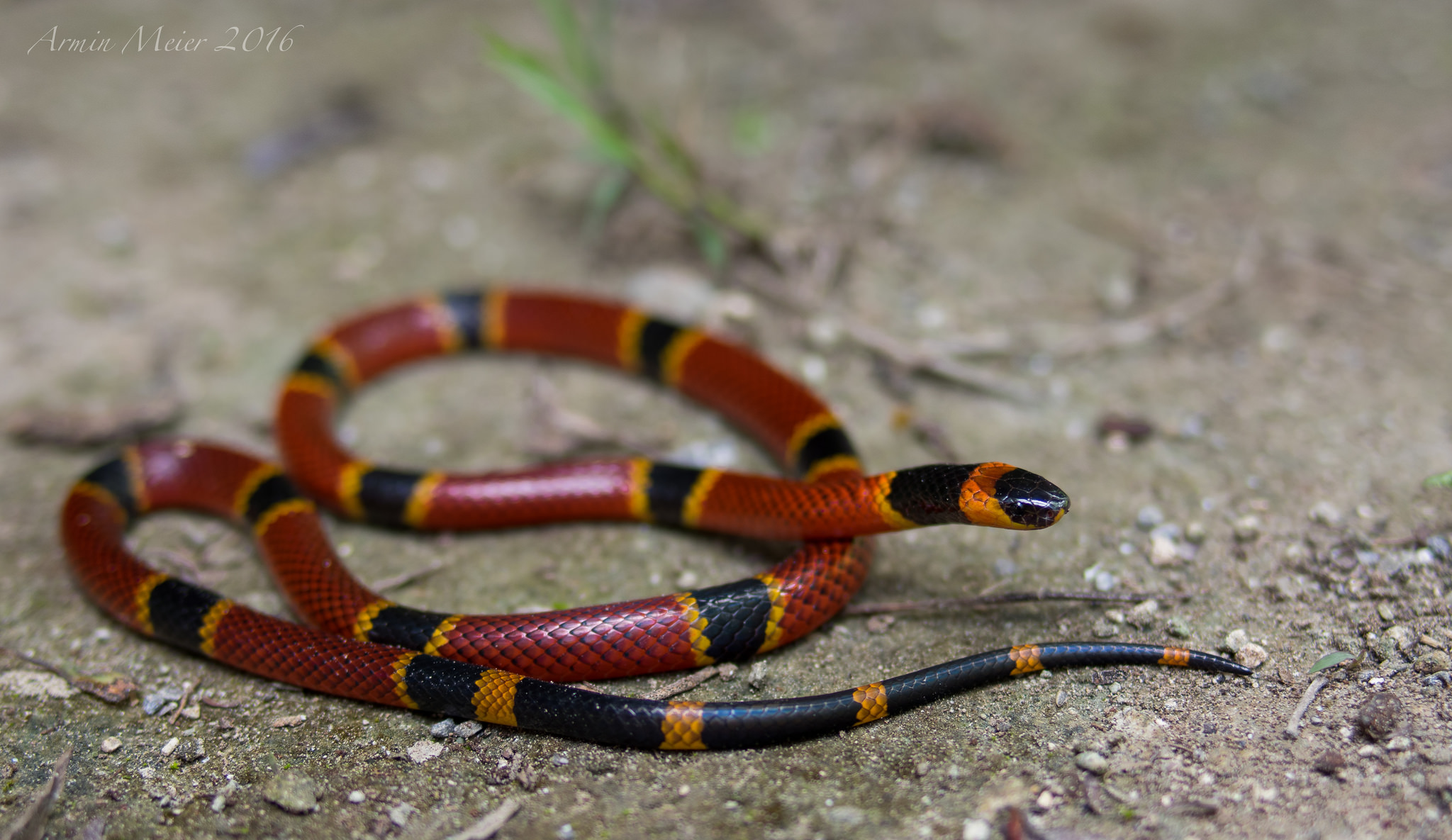 Variable Coralsnake photo by Armin Meier
Are there people who have handled venomous snakes without tools or protection and been none the worse for it? Sure. There are also plenty of people who drive their car on the road every day without getting in a major accident. The question becomes, “Where is the line between acceptable risk and recklessness, and when does recklessness become unacceptable?”
L.E.A.R.N. shares the same position as most biologists and people that work with animals professionally. Namely, that there is no good reason to freely handle a medically-significant venomous snake. Furthermore, the best practice is to never handle any snake that you cannot positively identify as harmless. Even if you know all the venomous snakes in your area, there is no guarantee that an unfamiliar snake is not an exotic escapee.
Do snakes have an innate desire to bite people? Not at all. They are not stupid and generally know that biting an animal many times their own size is antagonistic and dangerous. However, any animal—especially one that does not know you personally—will defend itself if it feels threatened, and you approaching them is a good reason for them to feel threatened. Even a pet snake, which is what is often seen on YouTube or Facebook, can react suddenly and unpredictably.
There are many photos and videos on social media of “fearless” (you can choose your own alternate term for it) keepers holding their pet viper or elapid to show “how gentle they are.” There are also plenty of examples of these same folks in the hospital or morgue sooner or later. Just because an animal “probably won’t” hurt you is no reason to be irresponsible. Even in countries with “free health care,” suddenly finding complex toxins coursing through your arm is something you’re sure to wish you had avoided in hindsight.
If you do insist on free-handling a venomous snake, please don’t post it on the web for “likes” or “retweets.” You may tell yourself that you are trying to send a “positive message” that they are friendly, but—even if you do not get bitten—you are setting a dangerous example for impressionable viewers who will think that following your lead means they can handle any snake they see with impunity. If you’re not going to play it safe for your own sake, please consider the effects your actions may have on others and don’t handle venomous reptiles without proper reason, tools, and precautions. 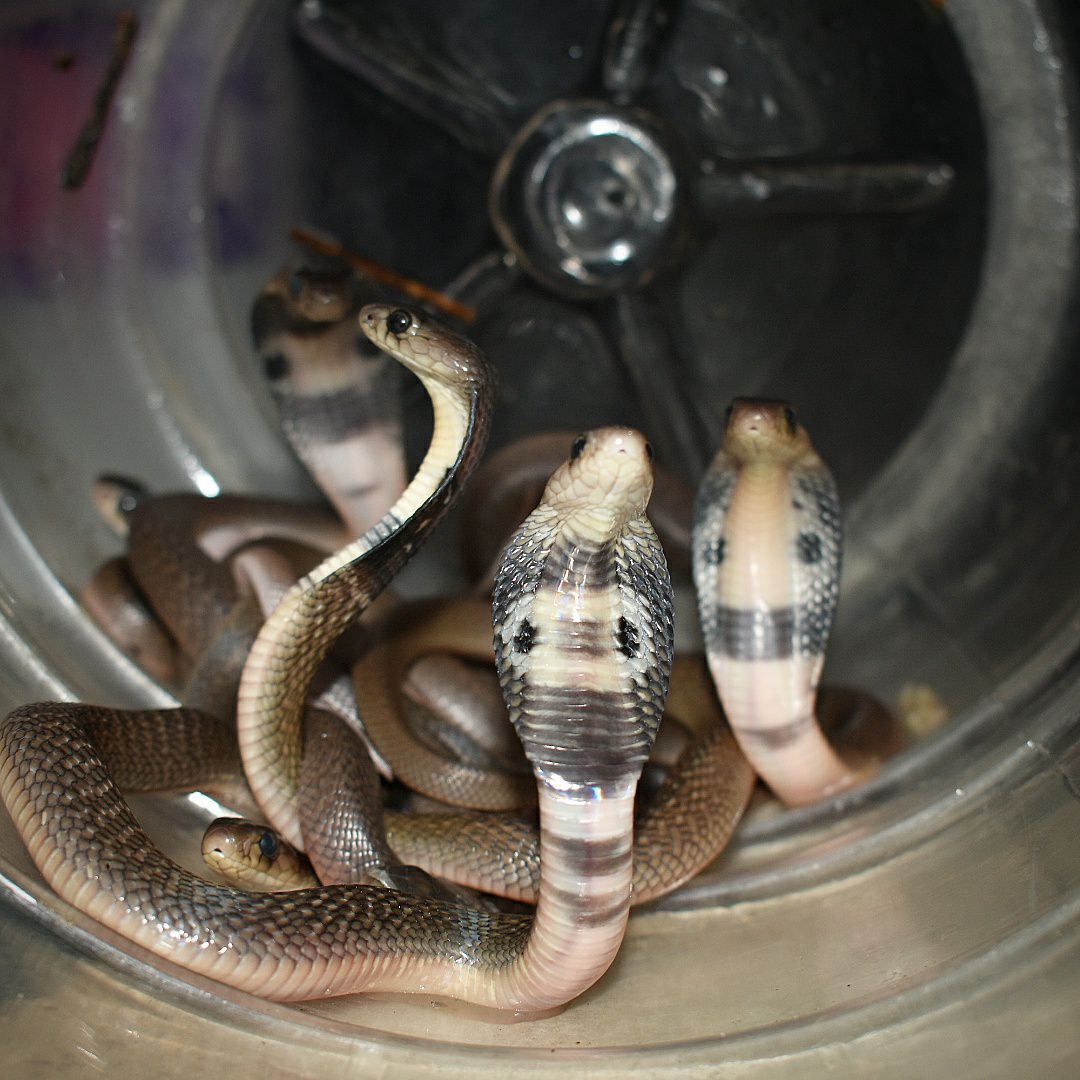 Indian Cobras photo by Gunjan Pancholi
Some feel that it is acceptable to handle venomous snakes barehanded. While each person must decide for themselves what risks they consider acceptable, L.E.A.R.N.’s position is that only those with training and good reason should handle these animals, and even then only with proper protections in place.
Check out our FREE book!